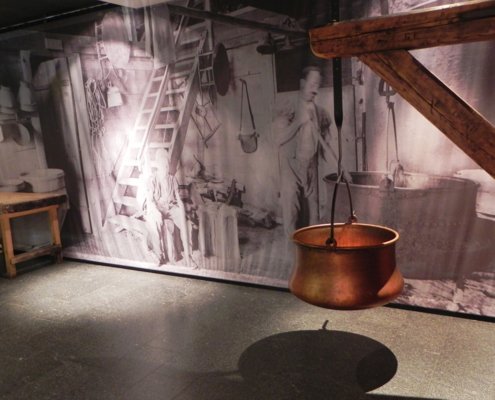 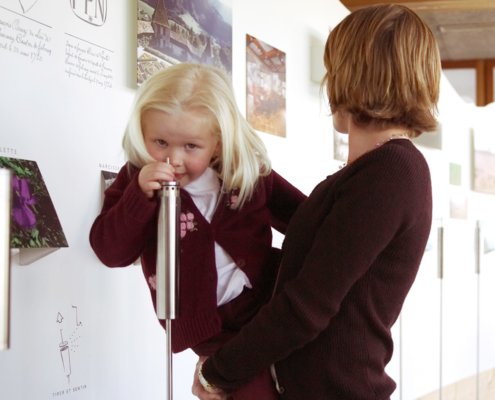 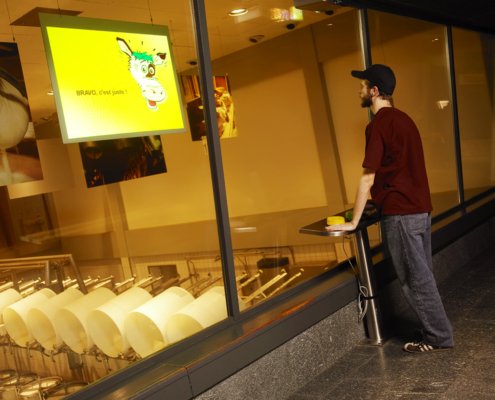 Le Gruyère AOP is a cheese with a long tradition and its making has been handed down over many generations of cheesemakers both in the alpine and village cheese dairies.

La Maison du Gruyère guides you through a modern world of the senses and our cow Cerise (Cherry) introduces you to the secrets of the Gruyère AOP making.

Hearing – the staircase that leads to the exhibition reverberates with the sounds of Gruyère AOP : bells, bellowing, the streams that rush down the mountain-side, a journey inside a drop of milk…

Smell – is represented by typical aromas, such as the flora of the high pastures and the hay. These are deeply suggestive odours that penetrate deep into the subconscious.

Touch – also has its small role to play during the visit : herbs, cow-hide, lime, cheese probe and brush, milk canisters…

Taste – your taste buds are lured by tasting Gruyère AOP cheese at three different stages of maturity : 6, 8 and 10 months.

Furthermore, our exhibition features : panels giving of general information on the cheese dairy, the Gruyere AOP and the cellars as well as a film shot at La Maison du Gruyère showing the various production stages of Le Gruyère AOP.

A headset is given to you and the audio information is available in thirteen languages : English, French, German, Italian, Spanish and Japanese as well as Arabic, Chinese, Czech, Hungarian, Polish, Portuguese and Russian. Written translations also available in Albanian, Korean, Dutch, Finnish, Hebrew, Persian, Romanian, Turkish and Ukrainian.

Small dogs are allowed in the exhibition only if they are carried.